Fiancé(e) Visa or Immigrant (Spousal) Visa? Which is Best for You? 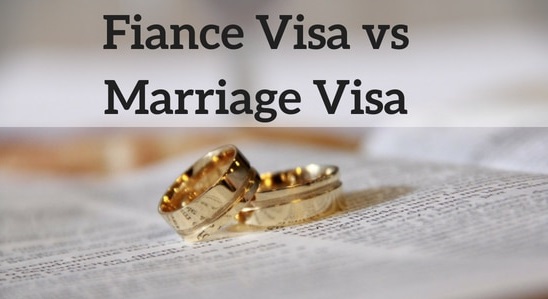 Fiancé(e) Visa or Immigrant (Spousal) Visa? Which is Best for You?

There are two ways that a US citizen who has a significant other living abroad can bring that person into the United States- as a fiancé(e) through the K1 visa process or as a spouse through an immigrant visa.

A fiancé(e) visa, is the process by which a US citizen petitions his or her fiancé(e) who is residing abroad to bring them into the United States, marries within 90 days of entry, and then files the paperwork for an Adjustment of Status, also known as permanent residency.  An immigrant visa, on the other hand, requires the couple be legally married first, whether in the immigrant’s home country or elsewhere, and upon obtaining the visa at the US consulate in the immigrant’s country of residence, enters the United States and automatically becomes a permanent resident, also known as a green card holder.

In the past, fiancé(e) visas were often preferable to immigrant visas because they processed much more quickly and were a faster means to get the immigrant into the US to reside with their US citizen partner.  However, in recent years, fiancé(e) visa processing has slowed significantly so that the cases process at almost the same length of time as an immigrant visa.  Because of this, I find that, depending on the couple, it makes more sense to first get married and pursue the immigrant visa for the following reasons:

Employment Authorization upon entry to the US

When entering on a K1 visa (fiancé(e) visa), an entrant is entitled to apply for employment authorization. However, with slow processing times, it often takes 6 months or more for the employment authorization document (EAD) to be approved.  Your fiancé(e) cannot legally work during this time, and based on the state you live in, may not be able to even get a driver’s license.

When a spouse enters on an immigrant visa, they automatically become permanent residents or green card holders upon their entry to the US.  While it may take a few weeks or months for the green card to be mailed to their home address, the CBP officer at the airport puts a stamp in their passport as proof of their status.  Your spouse can use this stamp to immediately get a driver’s license and start looking for work, basically allowing them to hit the ground running upon entry.

Ability to travel internationally after entry

Another benefit that immigrant visa entrants have is, because they automatically receive green card status upon their entry, they can also travel internationally and leave the US if/when they need to, as their legal process is complete and they do not need to go through additional paperwork or processing.  If an emergency were to arise or there were a need for your spouse to leave the country, he or she would be able to do so without fear of whether they would be able to re-enter the U.S. after the temporary travel.

It is a different case for fiancé(e) visa entrants.  The K1 visa is valid for a single entry into the United States.  Once you get married and file the adjustment of status paperwork, the immigrant spouse cannot leave the United States without abandoning the application.  There is a travel permission called advanced parole that the immigrant spouse apply for as a part of the adjustment of status, but this takes about 6 months to be approved during which time the immigrant spouse cannot leave the US.  It is possible to expedite the advanced parole document but only in extreme circumstances will this be granted.

Due to the marital relationship already having taken place in Immigrant Visa cases, the process becomes 2 steps instead of the fiancé(e) visa’s 3, and as such, the government filing fees are significantly less.  To briefly explain the steps involved with the current government filing fees:

As can be seen from the fees above, the filing fees for the fiancé(e) visa process are over $1000 more than the immigrant visa process.

The biggest positive to the fiancé(e) visa process that the immigrant visa does not have is allowing the immigrant partner to marry their U.S. citizen partner in the United States on their own schedule (so long as it is within 90 days of the fiancé(e)’s entry).  This will allow the couple to celebrate their marriage in the way that fits best with their values and lifestyle, especially if the family and loved ones of either partner would not be able to travel abroad to attend the wedding.

If you are weighing your options on whether to bring your partner into the U.S. on a K-1 Fiancé(e) visa or through an Immigrant Visa, you should meet with one of our New York immigration attorneys to go over these options and discuss which might be the better fit for you and your partner given your situation and other various factors.