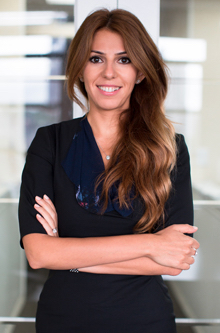 Svetlana Prizant, Esq., is the Managing Attorney of the firm and has personal experience in the immigration and naturalization process as an immigrant herself. Svetlana Prizant, Esq., was honored with a Super Lawyer Award of 2021 and 2020 and designated as a Rising Star by Super Lawyers Magazine in the field of Immigration Law. In 2019, she was named one of the ten best attorneys in immigration law by The Legal Practice Magazine. In 2018 she was one of the Top Forty Under Forty Honorees by the American Society of Legal Advocates and received the client satisfaction award by the American Legal Counsel Institute.

Using legal experience combined with an understanding of the immigrant communities Mrs. Prizant represents, she has repeatedly obtained extraordinary results for her clients. Mrs. Prizant began her practice with the sole intent of providing one-to-one service to all her clients. Her interest in immigration law stems from her personal background as well as her belief in the essential role immigrants play and the positive contributions they make to American society. Having immigrated to the United States she has experienced first-hand all phases of the immigration and naturalization process.

While in private practice in the most densely immigrant-populated area of the United States, Queens, New York, Mrs. Prizant handled immigration matters ranging from tough criminal deportations, to political asylum, complex family petitions, appeals and motions to reopen as well as all business related immigration matters. As a New York immigration defense lawyer, she has worked with immigrants from all over the world, including Eastern Europe, (Russians, Ukrainians, Uzbekistanis, Georgians, Albanians); Latin America (Colombians, Ecuadorians, Dominicans, Mexicans, El Salvadorians, Hondurans, Guatemalans, etc.); the Middle East (Egyptians, Yemenis, etc.); The Caribbean, (Haitians, Trinidadians); and The Indian Subcontinent (Indians, Pakistanis, Bangladeshis). Defending immigrants from incredibly diverse backgrounds in the bustling melting pot that is New York City has sensitized Mrs. Prizant to the specific needs and the cultures of clients from all these regions. Mrs. Prizant is admitted in the New York Appellate Division of the Supreme Court, Second Department. She is also a weekly columnist for the Ladies’ World Magazine and Queens Ledger newspaper.

Mrs. Prizant obtained her Bachelor of Arts in Political Science from Queens College and her Juris Doctor from the St. John’s University. As a law student, she gained practical experience at two competitive Clinics: Asylum and Refugee Rights Clinic and The Child Advocacy Clinic.

“I highly recommend her.”

I’ve worked with Prizant Immigration Law firm on my naturalization case. After being in U.S. over a decade finally I have received my United States 🇺🇸 Citizenship. Choosing to work with Svetlana and her team was the best decision I could ever made. Each and Every member of the team that I dealt with was so professional, kind,... Read More

“She is very kind smart bad will make you feel protected.”

Svetlana helped me file for Vawa case and although my case was outside of processing time fora decision she was follow you on it and always responsive to me and my worries. Case was finally approved and I am so greatful for Svetlana her thoughtful advice and the way she always was ready to listen to me and my worries and to make me feel... Read More

Highly recommend Svetlana’s law firm for your immigration needs. Svetlana always made time to meet or talk to me during my adjustment of status case. Needless to say that my case was approved and it was approved under a year. She is confident, knowledgeable, and pleasant immigration lawyer. I am very pleased with the level and quality... Read More

“I will forever be grateful to Mrs. Prizant”

I will forever be grateful to Mrs. Prizant for helping me to bring my kids to US. I hired her law firm to do consular processing for my kids. She clearly explained what needs to be done and what to expect, however she didn’t mind to answer all my follow up questions that I had later. I was reunited with my kids within 6 months or so. Go... Read More

Unbeatable customer service. Svetlana andher crew did everything possible for me to get my green card. Always responsive and exceptionally smart, Svetlana is the best immigration lawyer that I’ve heard of. Based on my experience, they are extremely detailed and thorough with documentation. Svetlana provided excellent guidance abs... Read More

“So happy with this firm and the professionalism.”

So happy with this firm and the professionalism. Thank you for doing everything possible and going above and beyond in getting my residency. I will recommend Svetlana and her immigration firm to everyone I know.

“Svetlana helped me to get my green card approved.”

Svetlana helped me to get my green card approved. I was referred to her by a friend of mine who used he services for an entire family. She is diligent, smart, and knowledgeable. She was excellent in preparing me for an interview and always would reply to my emails and calls. Her office is welcoming. I am recommending her as outstanding... Read More

“She made me feel protected and at ease.”

Svetlana gave me strength and hope to go through what I had to. I hired her to help me with my VAWA case. I was referred to her my a friend of mine who had to go through similar issues I was dealing with abs Svetlana was able to get her green card. During my petition process Svetlana insured me that everything will go through and will go... Read More

Are they good? I am writing this holding my green card in my hand - this is how good Svetlana is. I can't fully express how grateful I am to Svetlana and her team. Svetlana really cares and changes lives. She is a professional and knowlagable. During my process of getting green card, they were incredibly fast in answering all my emails... Read More

“Was very impressed with her knowledge and dedication to my case.”

I hired Svetlana to help me to reapply for a waiver after denial. Was very impressed with her knowledge and dedication to my case. Within two years not only my waiver was approved but I also received my green card.