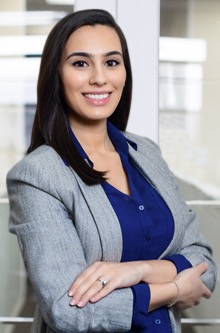 Mrs. Khaimov is a first-generation U.S.-born citizen. Her family emigrated from the U.S.S.R. (former Soviet Union) in 1991. Mrs. Khaimov’s family fled due to persecution on account of religion. Their struggle to start anew in a foreign country has always been the recurring theme of the stories told to her and her siblings. All the steps taken just to give them, the children, a better future and a better life, cannot be forgotten. These stories often included individuals who extended a helping hand so as to make the transition smoother. Being raised on these stories, Mrs. Khaimov has always appreciated the fact that she had been given the opportunity to have a better life, here, in the United States. She found that it was her duty to do what she can to help individuals, who are now in the position her family was in, to give back to people as a token of appreciation for what was given to her family. As many first-generation young adults’ notice, deeply tied traditions often follow families to their new homes. For Mrs. Khaimov, one such tradition has been to put family before all else. Mrs. Khaimov can easily say that such a value has been deeply embedded in her. Mrs. Khaimov’s great appreciation for individuals who help foreigners in need, mixed in with her value for family, has prompted a great desire within her to become an advocate for people burdened by the complex immigration system. Mrs. Khaimov graduated from Touro College Jacob D. Fuchsberg Law Center where she received her Juris Doctor degree. She plans to pursue her dreams of being a legal advocate, in efforts to help individuals like her parents, who want, so badly, to give their children better opportunities, and ultimately, better lives.

Mrs. Khaimov intends to use her drive to help others, together with her legal education, to further her goal in which she is able to help families come together and stay together, regardless of what unsystematic obstacles might appear.

“She's always very quick to respond to our many, many questions over the phone and by email”

Extremely grateful for Svetlana getting us through our case. She's always very quick to respond to our many, many questions over the phone and by email. I am very glad we picked Svetlana as our attorney.

“I went to so many lawyers for over 12 years, just to come to you and guide me correctly and solve a decade long case in a couple of months”

Thank you so much for helping me get my citizenship. I went to so many lawyers for over 12 years, just to come to you and guide me correctly and solve a decade long case in a couple of months. I am immensely grateful for your advice and honesty. You were upfront and honest with me. Something that many lawyers lack. Keep being great and I... Read More

“My experience with her immigration firm was only positive”

I found this Immigration Lawyer through my friend who used Svetlana's office for his immigration matters. My experience with her immigration firm was only positive. Staff was helpful and very organized. Whenever I called them to check on the status, they always know who I was and would always find time to give me updates or answer my... Read More

“Thanks to their excellent professional service, my father was able to get a visa to come visit his children in the US”

This is the best immigration law office I have ever seen. Thanks to their excellent professional service, my father was able to get a visa to come visit his children in the US. Svetlana and Diana, we will finally have a real family reunion this holiday season, and we owe all to you! So, THANK YOU from the bottom of our hearts!

Svetlana did 601waiver for my mother. The waiver was approved and I can’t wait to reunite mom mom with my dad who’ve been living here separately from her ever since we moved. Her prices are reasonable, her service is professional and to the point. Always available to answer questions. I am impressed by her knowledge of immigration... Read More

“The level of details that she reviews documents is unbeatable”

Svetlana is THE BEST IMMIGRATION LAWYER I dealt with. The level of details that she reviews documents is unbeatable. I’m addition to having a clear list of everything I needed to provide to her law firm, I also has an opportunity to review submission before it was mailed out. Through my whole experience with her I never had any... Read More

“Every one was, patient and kind and provided me with time I needed”

Excellent service was provided to me by this office. Every one was, patient and kind and provided me with time I needed. I am very great full for all services Prizant office gave to me.

Received 10 year Green card for mom. Thank you for your hard work, Me and mom really appreciate for professional work and everything you guys did... Thank you so much.

Mrs Prizant is the best immigration attorney one can have. Always supportive and encouraging. Guided me to the right direction and today I have my permanent residency. Knowing the process was long and complex; she made sure I am calm and collected throughout the process. Mrs. Prizant does pour her heart and soul to each and every case... Read More