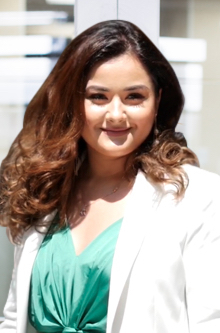 Mrs. Khaimova is a native of Russia and a derivative U.S. citizen. She arrived in the United States at the age of nine, scared and uncomfortable in her new surroundings. She—like many of our clients today—went through the process of applying for permanent resident status. Her father had migrated to the United States in search of better opportunities that would help sustain his family. Mrs. Khaimova was just two years old when her father had left her. Mrs. Khaimova’s mother was working as a teacher and became the sole breadwinner for her two daughters. After many interviews and several denials at the U.S. Embassy in Moscow, her long-awaited reunion with her father became a reality. Along with her mother and sister, they waited a total of seven years to migrate to the United States and become a whole family once more. Being under the age of 18 at the time, she became a derivative of her parent’s hard work. Her personal background rooted her commitment and desire to help others with their immigration status. She values family above all else and thus has a foundational knowledge of the struggles that families go through when being separated due to immigration issues. Mrs. Khaimova never took her parents’ sacrifices in life for granted. She is eternally grateful and thus intends to become an advocate for people who are going through the immigration system the way her family once had. Now, Mrs. Khaimova is a graduate from Hunter College of City University of New York (CUNY), with a bachelor’s degree in Political Science and a minor degree in Legal Studies.

She intends to follow her passion and continue her studies in order to become a legal advocate for those whose lives are being funneled by the everchanging immigration system.

Svetlana Prizant is easily one of the top immigration attorneys not just in Queens but all of NYC. There just aren’t many trustworthy choices in the field of immigration law in NYC but Svetlana is honest and incredibly professional. She always addressed all my concerns and questions in a prompt manner. I hired her to file the I-130... Read More

“Svetlana and her team were wonderful!”

Svetlana and her team were wonderful! Professional and helpful during the entire process. Svetlana will always be there to advise you during and after the process, They are the best!!

Received 10 year Green Card for mom. Thank you for your hard work, Me and mom really appreciate for professional work and everything you guys did. Thank you so much.

“Thank you, GOD bless YOU!”

BEST ATTORNEY EVER!!! Thank you for the help with my case. She has been supportive and helpful from the beginning. I took my case to multiple law firm and was disappointed with the response and when I discuss my Case with Prizant Law, Svetlana has been so patience and listened my case carefully. I had a faith with my case but while... Read More

“Great Service, Reliable and to the point.”

Great Service, Reliable and to the point. I applied VAWA and she guided me through all the process and ensured me a smooth process and finally I got Approved for my VAWA. I can't Write Enough to Say thank you for your support and help.

“Always ready to answer the question.”

The best immigration lawyer in Queens. Svetlana is very knowledgeable, professional and very quick to response. Always ready to answer the question. Me and my wife are very glad that we choose her as our attorney. She will throughly prepare you for the immigration interview. Highly recommended. Thank You Prizant law.

“We are very happy with her work and we highly recommend her.”

Mrs Prizant handled our case she was very proactive and detailed oriented. She was throughly caring in making the whole process buoyant. Our paper work was submitted in August and by mid January we had already received an interview date. Our whole process took 6 months for approval ( be mindful all cases are different). Mrs Prizant is... Read More

“I recommend to everybody go to her”

This lawyer is helping me, she help me get my passport, I recommend to everybody go to her she is smiling and she’s very sweet.

“I fully recommend that you reach out to her”

My immigration case was complicated and stuck in the quagmire of the federal government. My first attorney was good but when she left the office, her replacement was never committed to doing the job that needed to be done.

I found Mrs. Prizant and thanks to her experience I went from having questions without answers to... Read More

Mrs Prizant is the best immigration attorney one can have. Always supportive and encouraging. Guided me to the right direction and today I have my permanent residency. Knowing the process was long and complex; she made sure I am calm and collected throughout the process.

Mrs. Prizant does pour her heart and soul to each and... Read More