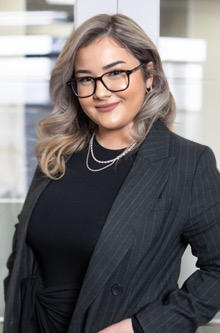 Diana Khaimova has been an integral part of the Prizant Law team for over 5 years. Mrs. Khaimova began her journey as a Paralegal for our law firm and quickly climbed the ladder to an Executive Assistant position. What drives Mrs. Khaimova the most, is her commitment and compassion to help those who wish to call the United States their home. In fact, Mrs. Khaimova was once an immigrant herself. She understands the struggles of a rigid immigration system more than anyone being a derivative U.S. citizen. She arrived in the United States at the age of nine, scared and uncomfortable in her new surroundings. She—like many of our clients today—went through the process of applying for permanent resident status. After many interviews and several denials at the U.S. Embassy in Moscow, Mrs. Khaimova’s long-awaited reunion with her family became a reality. Along with her mother and sister, they waited a total of seven years to migrate to the United States and become a whole family once more. Being under the age of 18 at the time, she became a derivative of her parent’s hard work and had successfully obtained U.S. citizenship. For this reason alone, Mrs. Khaimova is proud to be a Prizant Law team member. She is very meticulous, task-driven and experienced at what she does. There is no immigration related situation that Mrs. Khaimova isn’t ready to tackle. It is due to her administrative experience in managing client-centric office operations why our clients so feel comfortable in reaching out to Mrs. Khaimova as their first point of contact. Equipped with exceptional ability to facilitate all aspects of internal and external communications, support the day-to-day administrative, immigration, and operational functions by working closely and collaboratively with the Executive Attorney of Prizant Law, Svetlana Prizant, Esq.

“She's always very quick to respond to our many, many questions over the phone and by email”

Extremely grateful for Svetlana getting us through our case. She's always very quick to respond to our many, many questions over the phone and by email. I am very glad we picked Svetlana as our attorney.

“I went to so many lawyers for over 12 years, just to come to you and guide me correctly and solve a decade long case in a couple of months”

Thank you so much for helping me get my citizenship. I went to so many lawyers for over 12 years, just to come to you and guide me correctly and solve a decade long case in a couple of months. I am immensely grateful for your advice and honesty. You were upfront and honest with me. Something that many lawyers lack. Keep being great and I... Read More

“My experience with her immigration firm was only positive”

I found this Immigration Lawyer through my friend who used Svetlana's office for his immigration matters. My experience with her immigration firm was only positive. Staff was helpful and very organized. Whenever I called them to check on the status, they always know who I was and would always find time to give me updates or answer my... Read More

“Thanks to their excellent professional service, my father was able to get a visa to come visit his children in the US”

This is the best immigration law office I have ever seen. Thanks to their excellent professional service, my father was able to get a visa to come visit his children in the US. Svetlana and Diana, we will finally have a real family reunion this holiday season, and we owe all to you! So, THANK YOU from the bottom of our hearts!

Svetlana did 601waiver for my mother. The waiver was approved and I can’t wait to reunite mom mom with my dad who’ve been living here separately from her ever since we moved. Her prices are reasonable, her service is professional and to the point. Always available to answer questions. I am impressed by her knowledge of immigration... Read More

“The level of details that she reviews documents is unbeatable”

Svetlana is THE BEST IMMIGRATION LAWYER I dealt with. The level of details that she reviews documents is unbeatable. I’m addition to having a clear list of everything I needed to provide to her law firm, I also has an opportunity to review submission before it was mailed out. Through my whole experience with her I never had any... Read More

“Every one was, patient and kind and provided me with time I needed”

Excellent service was provided to me by this office. Every one was, patient and kind and provided me with time I needed. I am very great full for all services Prizant office gave to me.

Received 10 year Green card for mom. Thank you for your hard work, Me and mom really appreciate for professional work and everything you guys did... Thank you so much.

Mrs Prizant is the best immigration attorney one can have. Always supportive and encouraging. Guided me to the right direction and today I have my permanent residency. Knowing the process was long and complex; she made sure I am calm and collected throughout the process. Mrs. Prizant does pour her heart and soul to each and every case... Read More